Video Analytics software basically "watches" a video stream, and based on certain activity or events in the stream, it can make different "decisions" about what action to take. Below are some features of App-Techs' Video Analytics system. License Plate Recognition The software reads license plates, a function known as LPR (license plate recognition). It "sees" a license plate with text on it, and then based on certain shapes on the plate, it translates them into text. This LPR functionality is looking for certain fonts or typesets, and certain characters in a language, and that particular language or alphabet must be installed for the LPR to recognize those characters. Motion Sensitivity Historically, there is motion sensitivity, which is an analytic of sorts. The software detects motion, and notes an event. It can also detect the crossing of a "virtual line," in a specified direction or in any direction. Thus, it can detect an object or a person moving in a certain direction, and a camera can be installed on a one-way street. Software can then send an alert if someone is going in the wrong direction on that street. Event Triggering In schools, if students are supposed to be entering through a main door and checking in, cameras can be positioned at peripheral doors to detect anyone entering there. There may be times of day when exiting by other doors might be permissible, for instance at day's end, and the software can be set to trigger an event if there is motion in or out of the door except at this time of day. This is the result of Dave's work to design scheduling functionality. Detection of an Object Left Behind There is also the ability to detect an object left behind. If someone walks into a waiting room or a lobby and leaves behind a backpack, this can register as suspicious. The software "knows" what the area should look like normally, and so if a different object appears and remains there for a certain period of time without moving, it can record an event and send an alert. This is true even at a busy time of day. Knowing what the scene should look like with nobody there, people can come and go all day long, yet it can still identify something that stops and doesn't move. Loitering Detection Another application is loitering in an area where that is not allowed, perhaps in an apartment complex or a public building. If you have a certain space, and suddenly one or more people congregates in or around the same area for a period of time, the software can record an event and send an alert. This could also prove relevant in a school, where a physical conflict between students may be brewing. Detection of a Removed Item Just a software can detect an object left behind, it can also detect one which is removed. For example, a business may have a tool rack, and the software "knows" what it should look like when it is full. Tools can leave that space, but they must be returned and the rack should be full at the end of the day. If not, an alert can be sent. Increased Movement or Speed Detection Another application is speed detection. If movement in an area is typically at a walking pace, and suddenly one or more people are running, this could indicate an emergency situation and again, an alert could be sent and an event recorded. Also, there may be a normal vehicle speed on a given street and users can be alerted if someone is speeding. Summary of App-Techs Innovative Approach All of these analytics are built into the cameras and software. App-Techs writes software which takes all of these events and alerts we are getting, analyzes them within the context of a schedule, and determines if anything is to be done about them. Our programs also monitor events from different sources, events that happen natively in Milestone and events in third-party software. One example of the latter is Intelligent Video Analytics from a company called IntelliVision (first image above), which is then sending data directly to our software. The result of this overall process is that data sent from different sources can be mapped to a specific camera within the Milestone system, and then we can bookmark these events and alerts. This log can be accessed and video footage for those specific times can be reviewed by a security officer or other staff member. This analytics work is all happening within our MXP Bridge software (second image above). While it could be developed in a direction where real-time alerts are also being sent to users, this is not presently the case. There is, however, currently an interface which displays a window on the screen within the Milestone Smart Client (third image above), and red text, indicates a noteworthy event or alert within the log. This is opposed to merely seeing a lengthy record of all events somewhere at the bottom of the screen. For security staff, that window should always be blank, otherwise if there are one or more red events, this is a cue that something happened. The App-Techs team appreciates Dave's and Dan's work on video analytics, and we look forward to seeing our customers reap the benefits of their continued efforts. 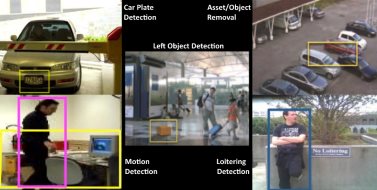 Back to News Index